Create and combine nodes to produce the right amount of energy from the flowing particles.

CONTROLS: mouse - drag to create a node, click to remove.

◆   Rhombus nodes are “factory“ sources that produce the energy bits.
◉  Large circle nodes are outlets. They are destinations, consumers, sinks. The game ends when one of them starves of power.
•    Smaller circle nodes combine energy from multiple sources. They can be removed by clicking.

That was fun. I enjoyed it. Nice game.

its a nice casual game you got right there. its really simple yet unique, it feels like every node thats appear seems like like a puzzle for me like which node i need to combine and which one that will do the other node. i hope theres more game like this from dev.

Congratulations for the 8th place in the Ludum Dare 39, this game absolutely deserved it! Your puzzle concept as well as the art design may be minimalistic, but it has such a high replayability and it's quite addictive to try it over and over again. It has a bit of a "Mini Metro" vibe in my eyes, and oh boy, you won't believe how many hours I spent with that game. <3 That's why I wrote a short article about your game and also created a little gameplay video of it. :) Looking forward to your new game projects!

Thank you very much for playing! The review is great :)

This game is brutal...

This game is an exact rip from the original "Supernode" game developed for the Window 8 Store, published in December 2013.

Dusty Room: You ripped off the title 'SuperNode' and exact game play!

Please give credit to the original developers of this game prior to accepting kind comments.

This video was a sneak preview of this game from 2013 on YouTube.

often the game focuses on puzzles such as obtaining the player directly or indirectly manipulating them into a specific pattern. usually involve shapes, colors, or symbols, a dissolving as the primary gameplay activity. Games usually involve puzzle solving as the primary games focus on logical and conceptual challenges https://seh.itch.io/spawncept

Bug I found: When trying to make a line and the owner nodes disapears the pink line stays on screen.

Thanks for reporting the bug! We'll fix it in the upcoming version.

A very interesting - and addictive - game. Despite the flaws I see, it's interesting enough that I kept trying to beat my top score (212 atm).

A little more detail for new players:
The pink ring around each circle 'outlet' is a timer that will have time added when it receives an energy dot (though not reset). The blue meter indicates the outlet's progress to completion. You can add as many connections as you like from each factory or 'combine' node, but the energy will alternate which connection it travels (each destination will receive energy less frequently). You'll want to try and micro-manage the connections such that your combine nodes receives all their source energy at a similar rate (it won't send the combined energy until it receives energy from all it's sources).

A cheat / bug / weird mechanic that might be handy:
Create two combine nodes from a factory node, then connect one to the other. Now you have 2x the original factory's energy at half the rate you would normally have. This is handy when you don't want to add more connections from existing factories.

One of the major issues I find is that the number of on screen elements can get overwhelming and it becomes difficult simply to find the different factories in the network or easily miss an outlet that hasn't been connected. Changing the colours scheme to contrast the two might work. Or highlighting other factories / combine nodes when creating a new connection. Or making outlets appear in waves, to give the player time to clean-up / micromanage their network without losing tension. There are a few options.

The other major issue was that it felt difficult to accomplish the primary goal to achieving a high score - balancing the distribution of energy between factories. Namely, when a factory or outlet appears you would scramble to connect it up, but you wouldn't have enough time to use it very efficiently. It's not telegraphed to the player very well, but the energy can go to waste sitting (or dissipating?) at combine nodes while waiting for other energy from a different connection to combine with. The UI doesn't inform you of this at all and you seemingly don't have time to fix these issues in your network, but it's the ultimate reason you lose a game AFAICT.

A similar game that others may want to try is Mini Metro.

I hope you release an update for this, because it shows great potential. :)

Thanks a lot for the comments! We do work on an update, please feel free to add your ideas here: https://trello.com/b/ojeNlNyg

Regarding the strategy with creating two combine nodes from a factory node, then connect one to the other - this is legit, it helps a lot and we use it all the time. Maybe we should include it in a tutorial.

I added everything to the trello board.

Wow! This is the coolest puzzle i've played in years!

WOW!!! WOW!!! WOW!!! i AM IN LOVE WITH YOUR GAME, THIS IS THE best game I've played in a long time!!! it is just clicks all the boxes!!! I just want to continue playing and playing, again and again!!! And I am a casual user, so this is the best you will possibly get :) Don not care about the music or anything else, just connecting those nodes :) THANK YOU!!!! LOVE IT !!!

Very addictive, I love it ! The only thing is the glitches (at least I think so), if you get too many points (700~800 and more) the screen will seem a bit weird and you won't be able to read most numbers, also if you get a lot of points the difficulty becomes inexistent except for the reading part and a bit for the distance between the points but basically after 800 points the only way of losing is by giving up, my high score is 1223, and if you ever think about making a little update someday after the jam then is would be awesome.

Thank you for the helpful comment! There should be ways to fix that. Nice work with high score!

Overall  a classy game ! Complex gameplay combined with smooth graphics and a soothing music.
You got style.
Thank you for making good games

Thank you for playing!

WOW. This is so incredibly slick. The sound, animations and colors all work together to create a really cool and relaxing aesthetic. This game could have been really stressful, but because you went the extra mile on the art side, it becomes an almost meditative experience. Thank you!

Thank you for your kind comment! Glad you liked the game. 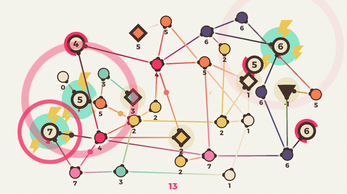 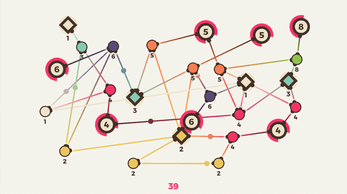